Where Are the Wrinkles at St. Kitts? 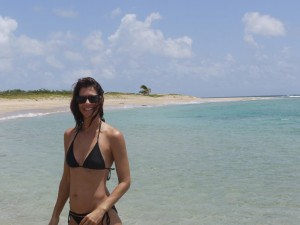 I’ve spent the past week vacationing on the beautiful Island of St. Kitts, in the Caribbean. I was not very familiar with the Caribbean and as such did not really know what to expect in terms of weather either. Also, because I reside in Las Vegas, I tend to forget that other parts of the country and world are subjected to very humid weather conditions, especially during our summer time. So it’s no surprise that from the moment I exited the airplane, I was struck by a thick wave of humidity that I can further describe as muggy, sticky, suffocating and unbearable. I was beginning to regret the trip altogether. We hiked to the main terminal and stood in line for our passport check; I don’t want to sound spoilt but the lack of air conditioning, or a fan, or any passage of circulating air for that matter, made our situation all the more oppressive. I was growing concerned about my son’s red cheeks, damp hair, and beads of sweat across his forehead. Similarly, every bit of my clothing felt moist and sticky. We waited for our baggage, which failed to arrive; we stood in front of the cargo belt for a hour, confident that ours would soon show up, but slowly the terminal emptied and we were forced to accept the outcome. We exited the baggage claim area, and went looking for the airline desk that would help us deal with the situation. Again, we found ourselves in another oppressively suffocating, hot room, and standing at the end of a very long line of people who were in a similar situation to ours.  Another thirty minutes went by and I was thinking that this was turning into a serious health hazard; I was very concerned for my son, so I left the building while my husband tended to the lost baggage situation. It was just a little better outside. Once our claim form was filled out we headed to our hotel–soon enough we found ourselves waiting in the very long check-in queue. It was during this time that I noticed the wet spot spreading across my son’s bottom; it dawned on me that I was left without any diapers—not a good situation to be in when the child in question has been very reluctant to potty train. 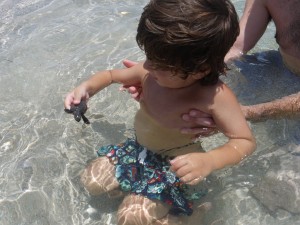 It was all worth it after all, finding a turtle in the water was wonderful.

A quick dash to the hotel store proved to be a waste of time, and the realization that the only other market had shut for the day–and I was stranded without one diaper to spare–did not help the situation at all. Like I mentioned before, I am not the spoilt type. so when we woke up the next morning and took a leisurely walk down to the beach, and dipped our feet in the glorious ocean (we were on the Atlantic side), the humidity didn’t matter at all, and neither did the fact that we had nothing else to wear but the clothes on our back, or that the little one was left to pee in nature. Regardless, we were not stranded on a desert island. When I finally took a closer look at our magical surroundings, I also noticed that the women on this Island had beautiful skin—there were no wrinkles in sight. None! During my one-week stay I learned quite a bit about the island, like the fact that its sister Island, Nevis, has a Jewish cemetery dating back to the sixteen hundreds. Jews in the Caribbean? No wonder we are called wandering Jews; many Jews who escaped religious persecution in Europe, came to the Caribbean in the hope of finding religious freedom.  Also, I learned that in terms of weather, it is humid all year round, and this explains why the women have beautiful, flawless, smooth skin. 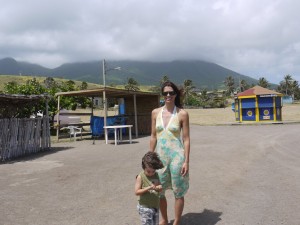 Simple, untouched beauty, no commercialism whatsoever, at least when we were there.

When I first moved to Nevada, I loved the dry, arid feeling that you get all year round, and I have grown exceptionally partial to it over the years. When I returned to Vegas last night, the moment I exited the airplane the dry air brushed across my body, it felt refreshing and very good. As we were making our way to the baggage claim area, I looked around at the sea of people rushing in all directions–the exact opposite from the calm we had just returned from. I looked at various airport staff and at some of the people walking back and forth; I noticed how a few had prematurely wrinkled skin–a direct result of extreme, arid weather conditions. The lesson that I took with me from this trip was this: when traveling to the Caribbean, never check-in your luggage, only take a carry-on bag; there is very little that you need in terms of clothing anyway–always take a sufficient amount of diapers in that carry-on! And as far as humidity is concerned, it’s great if you live in a very relaxed environment, where nobody rushes anywhere and everything is done at a snail’s pace. No wonder so many slogans in Basseterre read: “Relax be Happy.” I mean, what’s the alternative? Rush, feel anxious, and sweat like a pig albeit with flawless, smooth skin?

2 Responses to Where Are the Wrinkles at St. Kitts?