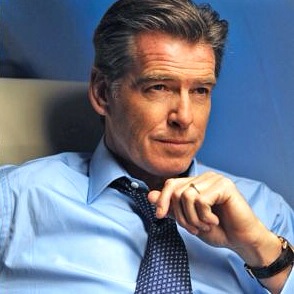 I don’t know many women who’d say that Mr. Brosnan is unattractive because of the lines on his face.

We have a pretty good idea of how most women feel about wrinkles, but not much has been said about men and their feelings toward those pesky lines. Generally speaking, some men have been known to suffer an episode of midlife crisis when (like their female counterparts), they are suddenly faced with many physical and psychological changes. Men often become introspective, they do a lot of soul searching and their value system sometimes changes too. Over the years I’ve watched enough hair transplant commercials and detected the obvious toupee; so perhaps the loss of hair for a man is the equivalent of wrinkles on a woman’s face? That would be the extent to which I’ve personally seen men worrying about their fading youthful appearance. It’s also the only thing that I’ve seen my own husband mention once or twice, but only in passing when he views the back of his head in a photo, he’s mumbled under his breath that he can’t believe how much hair he’s lost. He doesn’t really do anything about it, hasn’t gone to see a specialist, or considered a hair transplant.

Apart from the hair, a bad back and temperamental knee, I’ve never heard my husband complain about the crow’s feet around his eyes or the deep frown lines between his eyes or his pronounced marionette lines. In fact, when I first complained about the long, crooked wrinkle forming across my forehead he waved me away as though I were talking complete nonsense.  A figment of my imagination. I suggested Botox, but he thought I was crazy. 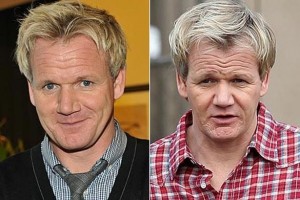 Chef Ramsay has admitted to not liking his wrinkly chin.

When reading about famous men who’ve aged, I seem to come across endearing descriptions such as, “He looks imposing for his age,” or “He was charming when he was young, and twenty years later he is just as attractive,” or how about, “That guy will be attractive no matter what!” Judging by those remarks, and social acceptance of their aged looks, it would not be unreasonable to assume that men can easily feel attractive and confident at any age. It’s the exact opposite of how women are perceived by plenty of men, as well as how they feel about themselves, once their face begins to show any signs of aging. I have to qualify what I’ve just said with the fact that there has been at least one famous person that I know of who’s smoothed out his wrinkles; I’m talking about Chef Gordon Ramsay, but this is not a trend of any kind, and rather an isolated example of male vanity.

There are those who would argue that in today’s climate of corporate success, a man is better off exhibiting a youthful appearance in order to further his career. However, in terms of how women perceive him—the aging man is still very much desirable. The ratio of older men marrying younger women is by far greater than an older woman marrying a younger man. Famous celebrity couples are mostly the exception to the rule; as of late there’s been Demi Moore and Ashton Kutcher who’ve been together since 2005 and have a 16 year age gap between them. To be fair, I have to mention a couple of actors who’ve married older women; there’s Hugh Jackman who met his wife when he was 26 years old and she was 39, then there’s Ralph Fiennes who married an older woman as well, I’m just not sure how much older. I’m positive that there a few more examples of this, but those would still be the exception to the rule.

In any case, not all of nature’s designs have been fair to woman, and the notion that we only get better with age, is one that seems to evade most of society. My experience with agism happened when I was a member on an online dating site; I was 36 years old and yet the only men who seemed interested in me were in their 50s. I couldn’t believe it. And please, this has nothing to do with agism on my part. The fact that I ended up marrying a man, also in his 30s had to do with the fact that Greg was European. It seems that foreign men are a little less obsessed with agism as is the case with American men, at least that’s been my personal experience so far.

So, when it comes to men and aging,generally speaking, they will continue to be adored by women regardless of their looks. The cosmetics industry will never have to branch out and cater to men in the same way that it has been doing for women—no need to when wrinkles are a non-issue.

As far as men are concerned, wrinkles and other physical changes in their appearance will never bear any weight on their confidence, and never change their status in society. Let’s just say that in this instance men have the upper hand. However, when the poor dears have to wake up multiple times during the night, because of their enlarged prostate, they can rinse their hands in the sink and look at their wrinkly selves with a big wide smile—then sigh that at least there’s one thing they don’t have to worry about.

2 Responses to Wrinkles and Men

Who needs a 60 year-old man with a baby face? I think that would be bizarre to say the least. Under the same token I think that a 60 year old woman who has stretched out all of her wrinkles tends to look just as strange. It is a shame though that women and men are not judged in the same way, and that a 60 year old-man is still considered handsome and sexy as opposed to a woman of the same age. A prime example of a sexy old-man is Sean Connery–how many women would love to spend the night with him regardless of his age? The more lines, the better.
Can’t wait for your book!

As a guy, I am more concerned with the loss of hair in all the normal places and the gain of hair in areas that I never had hair in before, than I am with my wrinkles. Just look at the TV, how many skin adverts do you see for women then compare this to the number of skin adverts you see for men. Now apply the same exercise to hair adverts…. See what I mean…..