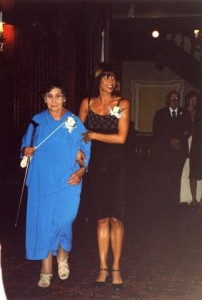 Granny Gertrude was unafraid of death.

Aging is something that does not preoccupy us when we were young; kids, even teens look at their grandparents lovingly as though this is the way they’ve always been, that it’s their purpose and role in life. They never think that one day they too will grow old, never. However, when reaching their late 30s and certainly during their 40s, aging is something that does indeed hold everyone’s attention for the first time.For most of us there are some physical changes that begin to slowly transform our appearance. We notice the appearance of our first wrinkle, a gray hair or two, while for some people age shows its marks on a thicker waistline. It’s when we begin to notice sunscreen for the first time, and wearing hats and sunglasses becomes a routine. For many women this also marks the beginning of a brand new relationship with yet another doctor, this time the dermatologist because looking young becomes a full time occupation. At least this is how it starts, while for the brave ones in the bunch it’s a one shot deal at the plastic surgeon’s office in order to put a permanent stop to all that nonsense that has  appeared on your face or body.

But it doesn’t mater whether you actually decide upon extreme measures to combat those changes, because from this point on your life will never be the same anyway. You stare a little longer in the mirror, unsure of whether it’s you or someone else—you wonder how on earth you suddenly look like your mother? You stretch your skin to the side of each eye, just to see what it used to look like, or perhaps because you think it might stay that way if you hold it tight for a little longer. Whatever you end up doing, you’ll find that you’ve agonized over your wrinkles even though you rather not.

Once this reality has kicked in, as though it were not enough to deal with, then so many other thoughts begin to surface and alter the way we think about our future. We associate aging with all sorts of problems, apart from our looks, there are more serious issues to deal with like physical ailments, but a big worry for many people is financial insecurity. Thoughts of our own mortality begin to haunt us, and aging is then something that we begin to detest with a passion.

In the Haaretz newspaper from Israel, they quote Dr. Susan Turk Charles, an associate professor at the University of Southern California, who says that, “There is plenty of proof that when people are older (65 +) they are emotionally better equipped to deal with the future and with their own emotional happiness. In twenty-five years time one out of four people in England will be sixty-five years old. The number of eighty-five-year-olds will double. This means that in the future, most of the English population will be a cheerful and happy crowd.  The older population tends to avoid looking into the past, and is not preoccupied with the future the way younger people tend to be.”

Professor Laura L. Carstensen, a lecturer in psychology at Stanford University who’s researched socioemotional selective theory says that in her research she’s found that when older people were asked to document their daily feelings and emotions, they exhibited a positive outlook on life, and were able to deal with personal criticisms much more effectively. They seemed to have the ability to better balance their emotional happiness. The older people had learned how to successfully avoid unhappy situations.

I find this research exceptionally interesting, especially after thinking about my grandmother’s outlook on life during the latter part of her life. She was 96 years old when she passed away, and I vividly remember her positive and happy attitude toward life. She loved to meet with friends, and to study Hebrew, and she even took up yoga and painting in her nineties. Earlier in her life, when she turned seventy, she recalled how unhappy she was about aging. She described to me how disgusted she felt when she viewed herself in the mirror; all those lines on her face distorted her appearance, and when she shut her eyes she would always envision herself as the 19 year old she used to be. Later on, even in her 80s she was horrified when viewing a photograph taken by my cousin. It was only in her 90s that she realized that she actually loved the photo and  appreciated her looks.

When she would describe her feelings about death and how unafraid she was, it sent chills down my spine—I still don’t like to think about it. Nevertheless, after reading some of the articles about aging and emotional well being, I am beginning to understand that the ability to better accept oneself as an old person is something that we usually acquire during our aging process. Nature has a way of putting our minds at ease, and letting us enjoy, rather than worry during the “golden years” of our life. If only nature would somehow prepare us to accept those wrinkle—that too would be much appreciated. There would be much more money left in our retirement fund, for sure!

3 Responses to Loving Your Age

I’m considered a “young person” and I honestly just cannot see myself aging. But…I’m exposed to enough women who complain about things like gaining weight, thinning hair, and WRINKLES!! So I know it’s in my future, but still, it’s nothing I really think about.

foodie, I do not know how old you are, but you have the right and healthy attitude toward aging even if it’s premature at this point. I am 60 years old and I am not going to fight the natural process of aging. I stopped dyeing my hair about ten years ago, and now I have streaks of gray blended in with the black, and it does not look offensive to me. I don’t feel “old” or older because of the color change. Dyeing my hair will not add extra years to my life either!

Ilana, your blog is great.