Date: August 14, 2009  Author: Ilana   Category: Wrinkles
Generally, I tend to live my life without putting too much energy into trivial matters—at the end of the day it’s just not worth it, and I don’t need more wrinkles either. However, sometimes that philosophy doesn’t keep me from feeling anger and frustration towards certain people, or utility companies, or airline representatives.Today, I went to Costco to pick up three photos, they were of my daughter’s headshot. Usually, I get her photos developed in LA, in bulk form, but today I needed three extra photos because she ran out of them, and she needed a couple more for an upcoming audition. True, I could have printed them at home, but it didn’t even occur to me to do so when I placed the order online. When I went to pick up the photos the lady behind the counter refused to hand them over to me because, apparently, I needed to provide her with a release from the photographer. I explained to her that I actually owned the photos, and as such there was no breaking of any copyright laws. She insisted that the name of the photographer was showing in the background of the photos, so I explained that it was not the photographer’s name, but actually a marketing gimmick by my daughter’s agent, and it was the agent’s name that she was actually looking at. After the shoot had taken place, the agent picked his favorite photo but we were given the entire disc, which we had paid for, in order to do with it as we wished. It was a very cheap deal indeed. In any case, professional headshots would never feature the photographer’s name in big, bold writing in the background—as big as my daughter’s image, almost. I provided the woman with the photographer’s email, it explained his pricing structure and this also included his phone number, but she refused to make the call. The general manger interjected, and once again it was a futile exercise in trying to explain to the corporate mind that sometimes things are done differently. Some photographers do not provide you with a release form, because they actually let you own the photographs, but it was to no avail. He repeated the same rules and waved the same paper in my face and even called me snide. He said that it was not store policy to phone up the photographer, so the photos remained in their possession. 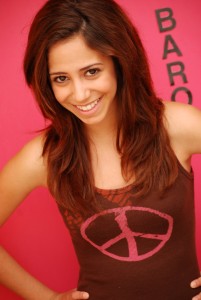 The agent’s name in the background was something that Costco couldn’t comprehend.

At this juncture I realized that I was wasting my energy and anything else I would say would fall of deaf ears, so I retreated back to my car and off to Office Max to get some color ink for the printer. It wasn’t such a big deal, not the end of the world, but it did make me ponder the state of things; most frustrating was the realization that we’re presumed liars until proven otherwise. Or how there’s one acceptable business practice only, which doesn’t weigh any other circumstances whatsoever, it’s as though theses people work with blinders over their eyes, I will never use Costco again for any future print job. Why should I give them my business, especially in today’s economic climate when every business transaction counts?
Again, not the end of the world, but just one of those pitiful, daily exchanges that lead to nothing and nowhere special. It makes you kind of pine after the days when trust was a main component of your everyday dealings with people. Growing up in Israel, I recall that when I’d go to the neighborhood supermarket with a shopping list from my mom, I’d never have to carry money because the shop clerk would write down what we’d owe him. This sort of archaic business transaction seemed to suit both parties, and it went on for years and years. For all I know it may still go on in these small neighborhood markets; I wouldn’t know since I no longer live there, but when thinking about the way things used to be, there sure is a sense of nostalgia for those good old days. 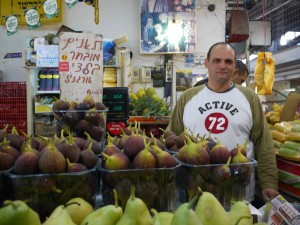 Yummy figs from an Israeli market, when all I had to say was “put it on the tab please!”

One Response to: A Wrinkle-Making Experience

I would have done the same!