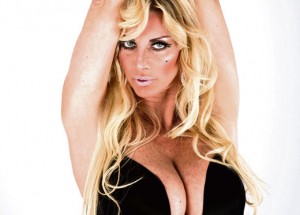 I’ve spent the past week racing around the clock and trying to abide by a specific time-frame for which to complete my next book. Nevertheless, I’ve peeked here and there at the different newspapers, always on the lookout for something interesting to offer my readers, and this time what caught my attention was the subject matter of teens using Botox. The very idea that people of that age group should even be remotely concerned over the appearance of a wrinkle is a bit of an enigma for me.This article was written by Lucy Ballinger on May 2nd 2010 in the Daily Mail: the mother of the teen in question is Miss Burge, a former Bunny Girl who promotes herself online and in the media as Real Life Barbie. She’s had something like 150 cosmetic procedures costing over £500,000. However, now her teen daughter Hannah Burge is following in her mother’s footsteps by becoming Britain’s youngest user of botox injections. She had her first injection of the toxin at age 15, because she ‘didn’t want to look haggard’ by 25. Are you registering this? Haggard at 25? Her mother administers the injections herself and was thrilled when her daughter asked for this procedure. Hannah, now 16, had her first dose while on a family holiday in Marbella, Spain, last May, with mother’s consent of course. Since then the schoolgirl has had two more Botox injections at home with Miss Burge, 49, who is a trained aesthetic practitioner. She uses the same Botox on her daughter that she uses on herself. The only concession she makes for Hannah’s age is to give her half the usual dosage given to adults.

Hannah believes the toxin—which she calls “B”—will stop her developing wrinkles in the future. She said, “I wanted to have Botox for two reasons: It prevents wrinkles and everyone at my school was talking about having B,” also because “I had a couple of lines on my forehead and around my mouth, which I was unhappy about.” Honestly, it’s hard to know where to begin here, but what’s very apparent  is the way in which our modern perception of beauty has already seeped into the minds of our children and has effectively changed their perception of beauty as well. 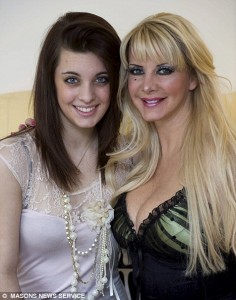 The young girl in question explained that appearance is of utmost importance to her. Alright, I can’t blame her for that because caring about ones appearance in an exaggerated manner seems to be a teenage thing, a phase of life—before you realize that there are more important things to strive for. But it’s her idea of looking haggard at 25 that is the focus of my concern. “Some of my friends told me that the earlier you start to have B, the fewer wrinkles you’ll have as an adult.” Haggard is immediately associated with wrinkles and nothing else. Hannah, of St Neots, Cambridgeshire, has heard of girls having Botox at 16, but believes she is the youngest to start. She now wants her mother to give her lip fillers for a fuller pout. She said that she’s met plenty of girls her age who are already having these procedures behind their parents’ backs. She believes that with her mother’s help she can get the proper guidance and avoid the frozen-face look when she’s older (like at 25?) and will never have a line or wrinkle on her face, ever!

Her mother, who has been married three times, regularly uses Botox herself, and has had her nose made smaller, her cheekbones made bigger, her breasts lifted, and the fat sucked from her face among other procedures. She admitted that she was absolutely thrilled that Hannah was open and honest with her about Botox. She understands that some parents would be horrified to hear her philosophy on beauty and aging, especially with regard to teens, but this is her way of actually protecting her daughter from back-street rip-off merchants. Also, considering she had undergone so much surgery, she’d be a hypocrite to tell her daughter she couldn’t get Botox herself.

Botox is the trade name for botulinum toxin, a bacteria that causes muscle paralysis lasting for up to four months. Claude Knights, director of Kidscape, said that, “To be using Botox at such a young age is of concern. She is terribly young, this is encouraging her to value herself purely on how she looks, she is not getting a chance to develop her character.” Fazel Fatah, president-elect of the British Association of Aesthetic Plastic Surgeons, said that Botox should be administered only by a professional in sterile conditions. He believes that excessive use of Botox can cause facial weakness or paralysis, and double vision, if injected incorrectly near the eye area. 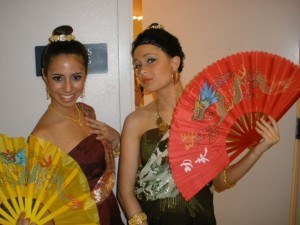 Thankful that my daughter is too busy learning her lines for a play, rather than obsessing over her looks in an unhealthy sort of way. (Maya and Kayla in The King and I, a Signature production.)

I’m so relieved that my teenage daughter’s only concerns have been what to wear to school, how to part her hair, or how to control that unruly and very curly-strand-of-hair when the rest  is perfectly straight. Today’s crisis right before school was how to deal with a pimple that suddenly appeared during the night. I admit that it was a big one, and she got angry when I laughed. Do teens give us headaches? Yes. Are they completely obsessed with themselves—with a heavy tendency towards selfishness? Absolutely. However,  it’s all normal behavior and it’s temporary. However, those other ideas about aging and beauty that have become so well cemented in Hannah’s mind is not the norm. How depressing to think of a future where everyone has adopted a generic look and that individuality and other traits such as, personality or even intelligence, take a back seat to everything else.