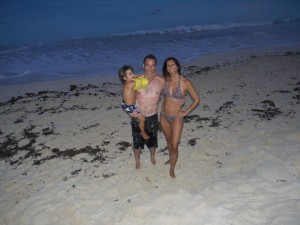 I’ve been spending the week in Cancun at the Me Hotel of all places, unbeknownst to me a paradise for the young and beautiful who like to party all day and all night long. Also in the mix are some of us older folks, a few of whom, I’m sure, are here to rub elbows with the party crowd, and others such as myself who are here just because it looked like a nice hotel from the photos online.

Earlier today, Maxim hosted a party at the beach and later on tonight the party will continue indoors at the Rose Bar. As I sat on my beach-chair this morning, there was an interesting dynamic going on–I could see the flow of young people slowly trickling into the roped area designated for the Maxim party-goers, and then there was that woman—an aging woman that is. 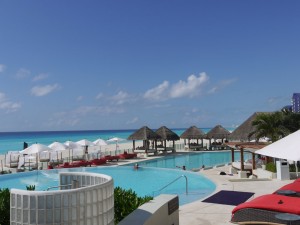 The roped area just beyond the pool.

We’re all aging, I realize, but she looked to be at least in her sixties, so completely out of place in this specific mix of people. I first noticed her when she was desperately trying to get a Bali bed in the party zone; I watched how she talked to a few of the personnel but to no avail, there was no way that they were going to entertain her request and allow her into the sacred young zone.

There were lots of thoughts running through my mind as I watched this play out but, for the most part, I was particularly distracted by the woman’s looks. I had no problem with her wearing a very skimpy bikini. Why not? We’re not all blessed with a cellulite-free-body, and all of us are going to have flabby bits one of these days. I don’t believe that a person with a less desirable figure should his/her body, or cover up completely when wanting to enjoy the sun and ocean. Some might argue that anything other than a perfect-looking-beach-body must be hidden away for good.

I could hear some of the people in my vicinity making a few snide remarks about the woman’s body and her choice in bikini wear—once again a stark reminder that anything but a youthful appearance or what people generally deem as “perfection” is not tolerated very well. Furthermore, the woman had gigantic implants, at least DD that had already taken a bit of a plunge with stretched-out saggy skin on each side. The implants though still looked stiff even though they resembled over the muscle papayas at this stage of her life.

The fake parts that surgeons implant in people’s bodies are never in-sink with the rest of the body, of course not, otherwise people would want their money back! THey’re not meant to show signs of aging but inevitably they do. These parts shift and change as other parts force them to do so.  Maybe what made the entire picture quite odd was the fact that this woman’s artificial breasts did not age in concert with the rest of her body. That was proof right there that tinkering with looks can eventually backfire because those boobs looked hideous, absolutely ridiculous. Unfortunately, she had tinkered too much with her face too and she looked like an old woman who had gone through facelifts and other procedures. She was another example of a woman who had gone to extremes in order to defy her own aging process, but for some bizarre reason, she had taken one too many steps and turned herself into a spectacle.

I was sad for her, she looked awful and there I was looking at her and passing judgment, albeit not in the same mean-spirited way others had been doing from just an earshot away. They were really having a laugh at her expense while I was pitying her for thinking that she had to take all of those measures in order to make herself look young and attractive when the results were terribly disappointing.

I ask myself over and over again why women do this to themselves? Have they not seen other women who’ve altered their face or body to such a degree that they look bizarre and definitely unattractive despite the money that was spent to look good? It’s tough though because we’ve all been subjected to so many messages that focus on the ideal body and face that we also believe those specific shapes and sizes represent a passport into a world of attractiveness and happiness—a world that will guarantee relationships, jobs, and wealth! However, if you don’t live up to these manufactured standards already, have no fear, there are many media companies, advertisers, doctors’ offices, gyms, diet food industries that promise to make you look absolutely perfect!

I’d be a complete phony if I were to say that my looks were not important to me and that I don’t take any measures to look good. But my “good” is not what these women consider a good look and vis. See what I’m saying? I’m completely turned off by the idea of elective surgery for the purpose of chasing after one’s youth–it seems so extreme, and there’s always that chance of something going wrong . . .  I also think it’s a bottomless pit, and once you’ve corrected one part there’s always another that has to catch up with that newer, youthful part, and it can easily turn into an obsession, you’re always looking to improve and fix yourself. We’re the worst when it comes to judging ourselves; I have yet to find one person who doesn’t want to change one aspect of their looks and there are plenty of companies out there that are banking on these specific insecurities. They will keep pushing images of the perfect face and body and erase any notion of aging in women so that another miracle cure, or product, or treatment can show up on magazine pages, or your TV screen, or your doctor’s office and guarantee to help fight that awful aging disease.

But what if we had a different mindset, one where we were kinder to ourselves and less judgmental?

Everything in moderation I say, even exercise.