“Stay a Girl – Cultivate Your Beauty and Retain Your Youth.”

The quote that I used for the title of this article was taken from a press advertisement in 1926. It featured Edna Hopper Wallas, an actress who would end up gaining more fame and notoriety for her cosmetics, because of her unique ability to maintain a youthful appearance even well into her sixtieth decade. Some believe that when reaching her forties and her stage life had declined dramatically; the roles were not as frequent, she grasped at the opportunity of profiting from her youthful appearance. 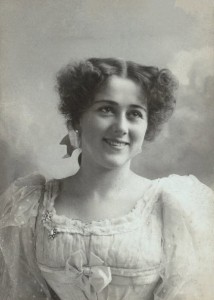 Reinventing herself in her 40s.

She was the name and face behind the many cosmetic products that reached the market and began to gain popularity among women who were envious of Edna’s appearance, and wanted to look just as good. She made sure to mention in the different publications that she had never suffered from any of the conditions that her products were meant to correct! 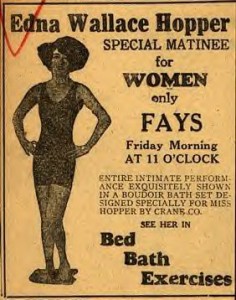 In order to respond and better help other women in their own quest of looking young, Edna became the star of a very special traveling stage performance. In this production that originated in San Francisco she performed only in front of women. Her own bedroom and bathroom were replicated on stage, and she took her audience on a detailed tour of her beauty regimen. She would even dip in chilly bath water—a feat that most women had trouble performing themselves, but with her careful demonstration of how the toes would go in last in order to lessen the shock, it was quite doable!

Edna’s cosmetics empire grew and prospered, but when her age finally caught up with her, she resorted to making radio appearances rather than performing in public. She was also one of the first actresses to succumb to a face lift, she had about three procedures done, even documenting the process on film. Upon reading this I could not help but draw comparisons to our modern-day pursuit of beauty and youth and the plethora of reality shows on television demonstrating this very quest.

Although Edna was the product of a different era, she had taken the same measures that women today take on a regular basis in order to retain their youthful looks. In her day, plastic surgery for bettering one’s looks was in its pioneering stages, it was not as widespread and probably unaffordable for most, but her cosmetic empire proved that women were just as eager and willing to spend money in order to look good, if given the opportunity to do so.

She came full circle when in 1953  she performed for the last time on stage. She appeared in the same role she had done when she first began her career on stage in 1893.

People had always been interested in knowing how old she was when she died, but she would always remain evasive about her true age. Some have speculated that she was probably in her 80s, while others have have said that she was in her 90s.

Edna may have been a very vain woman, but her desires mirrored that of many other women. At a time when society tended to be more prudish than not—albeit that stage performers adhered to a different set of rules as well as freedoms—Edna allowed the everyday woman to free herself of preconceived notions of immorality and promoted the idea of pampering oneself and enhancing one’s sexuality and beauty without any shame. She made the pursuit of beauty a mainstream idea, and this came just at the right time when people were looking for an escape, especially after WWl. Her ideas were not necessarily new, after all, both men and women had been pursuing beauty regimens throughout the centuries. However, at that particular time—as I mentioned above—women were still quite invisible and had not yet gained the confidence or the respect they deserved in a male driven society.

A little bit of eye shadow and lipstick brought on a renewed sense of self -worth and confidence and would change the way that men would view women from that point on. If you are into cosmetics and want to make a career out of it, you may start by attending an esthetics school.