As Long as There’s Hummus, Who Cares About Wrinkles? 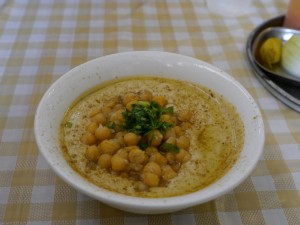 Hmmm, you have no idea what this plate of hummus tastes like unless you’ve been to Israel.

Recently I spent three weeks in Israel and apart from enjoying good weather, and good food, I also enjoyed a good dose of healthy views concerning wrinkles or anything to do with a woman’s withering looks. First though I must emphasize that Israel has some of the best food that I have ever eaten. I think that this fact goes unrecognized for the most part, because they are not known for weird and unconventional foods that normally induce all food experts, and critics, to come in droves for a taste and analysis of this type of cuisine.When sitting in a simple café in Israel, and don’t ever let location or size fool you, immediately you are bombarded by mouth-watering food items. I sat in one of these little eateries in Rehovot, a town once known for its orange groves, but today it boasts tiny little mom and pop restaurants along its very long main street. After I had appeased my ravenous appetite for their delicacies, especially their hummus salad and unbelievable pita bread, baked on the spot, I was better able to absorb my surroundings. 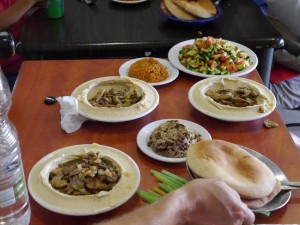 Hummus with mushrooms and a plate of chopped salad, I’m salivating as I write this.

What I then realized about the women around me was a revelation to me. Women from around the world have slightly different approaches to beauty. The women around me were all the same age—all of us forty-four years old. All of us had gone to school together in our primary school years, and decades later all of us had started to develop wrinkles in similar areas of the face. While I was busy hiding my face from the sun by wearing my big sunglasses and my trademark hat, the girlfriends enjoyed a sunny winter’s day to the fullest—arms, legs, faces—all exposed to the sun. One of my friends looked at me with a stupefied look on her face, as if something was wrong with me, because I was not fully appreciating this glorious day. But I was adamant on keeping my face hidden from the damaging sun rays.Then it struck me, how different I had become from my friends.

After a good few years in America, I’ve been exposed to a different culture, and in terms of aging and beauty regimens for instance, I’ve adopted a completely different viewpoint. But it was more than that, it was about the freedom that my girlfriends enjoyed—not having been brainwashed into worrying about wrinkles or their having reached an age that in America is considered over-the-hill in terms of beauty.

Nevertheless, I am sure that in Israel one will find a burgeoning cosmetics industry—we’ve all heard of Dead Sea products, Ahava creams etc. But rrom my experience alone, when observing my own friends, I think that Botox and other treatments are not as wide spread as they are in America. Certainly when sitting in a café in Rehovot or even Tel-Aviv, one is not routinely distracted by the looks of a woman who has either stretched her forehead to the limit or has plumped her lips so much so that it resembles a duck’s bill. The women around me had more of a natural look to them, which took a little adjustment on my part, almost as though they neglected their looks somewhat. My refusal to part with my hat and expose myself to the sun generated another remark, “Don’t tell me that you’re one of those Americans who is so obsessed with looking young that she can’t enjoy a little bit of winter sun?” I rebutted the remark by stating that I am definitely not obsessed, just educated and aware of the sun’s harmful rays. They laughed it off, accusing me of becoming much too serious as the sun was not harsh at all. “Ahhh,” one of them sighed, “growing older Ilana is human, it should not be viewed as something awful.” 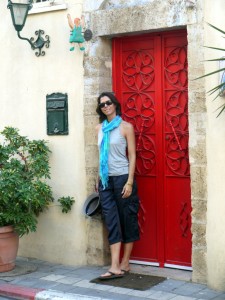 Beautiful Neveh Zedek in Tel-Aviv, notice how my hat follows me wherever I go!

Another friend asked me whether I use makeup on my face, a question that baffled me at first. Neither one of them had ever used makeup. On a good day they would use a little bit of lipstick and eyeliner, but none of them could understand why I chose to smear a layer of liquid on my face—they actually grimaced at the thought. In America I was so used to the flawless, make up look on women, especially when dressing up to go out on a special occasion, that it seemed to be the norm. This is the “look” that I could not find among my friends, because they had opted to use less paint on their face—resulting in their more natural look. 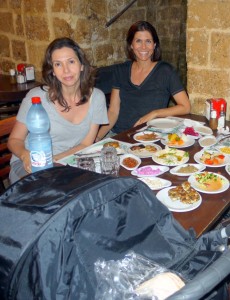 I can’t help it, most of my photos from Israel involve food.

They did however praise one product that had become all the rage in Israel. They said that pomegranate seed oil is fantastic for the skin. If applied onto a pimple then it’s guaranteed to disappear the next day, and another friend said that she squirts at least two drops under her tongue every morning because pomegranate seed oil triggers apoptosis, which is a self-destruct mechanism in breast cancer cells. 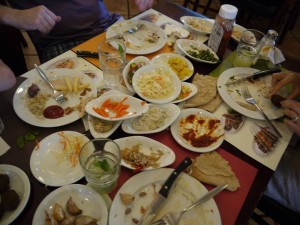 The aftermath at one of the places we frequented in Rehovot.

As I sat there admiring their laissez-faire approach to beauty I wondered whether I could ever let go of some of my compulsory beauty routines. The ones I had grown so accustomed to, and which convinced me that without them I could not possibly look good, or even consider showing myself in public without following all the steps. My thought process was disrupted by one of my friends who inquired whether I was going to eat the hummus on my plate, or whether I was too consumed with my weight. As her hand gravitated toward my pita bread, I snatched it from her and wiped my hummus plate. That hummus was unbelievable! “You’ll probably go running later, won’t you?” one of them so poignantly pointed out. “Probably,” was my snappy retort. In terms of weight I’ve always accomplished a measure of balance that has enabled me to eat whatever I want. The girlfriends on the other hand were all a bit overweight. I guess some of my American habits—I’m very happy to keep—as long as I’m able to enjoy a plate of hummus every once in a while.

If you’ve enjoyed my writing and interpretation of ideas about beauty and aging, then be sure to check out my books. I thank all of my subscribers for loyally reading my material and giving me a greater sense of purpose.