“Only Dogs, Ghosts and Europeans Have White Teeth.” 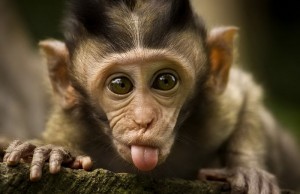 I thought that a monkey’s tongue would look more entertaining than a human tongue.

Once again I’ve decided to present my readers with more information about the body, based on everything that I’ve recently learned from a book by Andrew Morris titled, The Naked Woman. I love the way that Morris explains the biology of a certain body part, and then goes on to expand on cosmetic trends that it has undergone throughout the centuries. This always draws a reaction from me, and I hope that my own interpretations will serve to entertain you. Alright, let’s delve into the subject: In our mouths we have a tongue without which one cannot really talk, and if women ever lost their tongues, they would be “robbed of one of their supreme qualities,” says Morris. It’s not a sexist quip either, but rather an evolutionary fact that women are better able to communicate verbally than their male counterparts! Scans of the brain have shown that women are naturally more fluent than men. Primeval women were the communicators of tribal life, and this quality seems to have translated to modern times as well. The qualities of our tongues, which we are all very much aware of, are the ability to taste, masticate and swallow. Similarly, we are all aware of the little bumps in the upper surface of our tongues, those are called papillae and they can detect four tastes: sweet and salt on the tip of the tongue, sour on the sides and bitter at the back of tongue. Also, sweet and salt taste buds appear in other parts of the mouth while sour and bitter taste buds appear on the roof of the mouth where our hard palate meets the soft palate. Apparently, the reason we have always been able to detect so many different tastes is due to our ancestors and their need to detect good food from bad food; i.e., fruits that would taste extremely bitter for instance were more times than not, inedible and poisonous. Our tongue is also responsive to food textures as well as heat and pain. When we masticate the food in our mouths we are really testing it for lumps, only when we’re sure that it is lump-free, we are then ready to swallow it. It’s an action that we tend to take for granted, never thinking about it before we do it, just like breathing etc. The action of our tongue, though, after we swallow the food is another one of those reflexes that we never think about; the tongue engages in clearing all the extra food items from between the teeth as soon as the food has cleared the mouth. The next time you eat, try to be conscious of this tongue action, it’s quite funny really to notice something you’ve never been aware of beforehand. 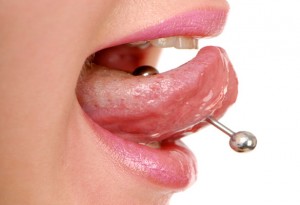 The pierced tongue = beef with mustard.

During the end of the twentieth century the tongue became the subject of cosmetic improvement when teens fashioned the pierced-tongue-look, but it never really caught on as a permanent and sweeping trend, as it tended to distort the speech somewhat. On the other hand, those who’ve advocated for more of this practice say that kissing without a tongue piercing is like beef without mustard, and if that analogy speaks to you, then I guess you’ll be curious enough to try it out one of these days.

Exploring more interesting facts about our mouths, let’s look at our teeth. The teeth for the most part have only been used for eating. An ape for example will pick up an object and examine it with its mouth, using his lips and teeth to decipher its usefulness.  Human infants, for that matter, do the same. As humans mature though, the mouth becomes less investigative, and the hands take over that role almost entirely. It’s the reason we don’t bite as much as carnivores do, and as a result of this our teeth have become much smaller; there are no more sharp fangs. Women’s teeth carve gently, men’s teeth are more blunt and angular; women have smaller jaws, so their teeth have become smaller as well. We use our teeth for grinding and chewing but also for clenching, clamping, gnashing, gritting, grinding, and chattering. It is believed that grinding teeth during sleep represents suppressed anger, and it is said to be a primitive response that suddenly resurfaces. Symbolically, we are grinding down an enemy. 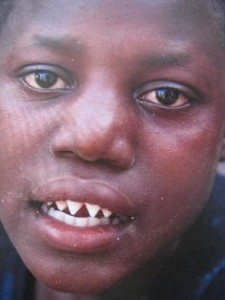 The sharpened teeth of a male from the Dogon tribe of Mali, West Africa.

Most everyone in the West deems a healthy set of gleaming white teeth as an essential component of beauty. In other cultures it has not been so. In places such as Asia, parts of Africa and North America, some societies have chosen to pull out the teeth in between the pointed canines in order to look more savage, more animal-like. 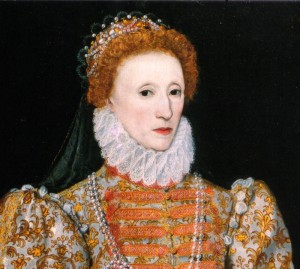 Queen Elizabeth l had rotten teeth, it’s a good thing that nobody smiled in their portraits in those days.

In Eastern cultures females have blackened their teeth to create an infantile expression, appearing more submissive to the men. During the times of Elizabeth I, only the rich could afford sugar, for this reason they were the ones who suffered from black, rotten teeth as well. Even Queen Elizabeth had black, rotten teeth. So the hapless poor, those who could never afford sugar, could not brag about rotten teeth either. But in spite of everything they were industrious enough; they learned how to cheat the system by blackening their teeth, pretending that they were indeed rotten—thus raising their standing in society, as well as the way in which everyone viewed their beauty. 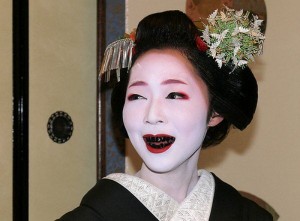 Black teeth were also the fashion once upon a time in Japan when high ranking women would get them dyed black or ohaguro; this, of course, was considered an ultimate sign of beauty. In parts of the Orient the practice was of chewing betel leaves, in the same way one would chew on tobacco, they would mix the leaves with other ingredients to create a package called quid. It acted like a stimulant, but also blackened the teeth at the same time. It’s also where the following saying had become popular: “Only dogs, ghosts and Europeans have white teeth.”

In Vietnam they took extra steps to ensure that teeth were as black as possible. They painted teeth with black lacquer, but since it would get washed away when eating and drinking, the women would abstain from eating, and would only drink from a straw for an entire week. White teeth were considered savage. 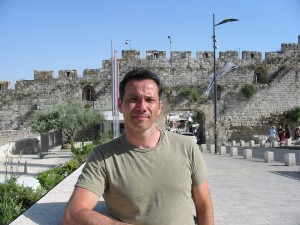 Okay, I think that these days we are all guilty of some of these cultural fads. I for one love that my teeth are very white and it helps that I am not a lover of coffee or red wine either. When I first saw a photo of my husband online, his mouth was closed, in fact, in every photo his mouth appeared closed so I never saw his teeth. He lived in England and I lied in Venice beach. When we were arranging to meet for the first time (those were the days before Skype had become incorporated with the process of online dating), I remember my sister’s words: “what if his teeth are typical English teeth, you know, Austin Powers etc.?” I laughed it off as nothing more than another one of our overly exaggerated American-induced cosmetic requirements,  but moments before we met, my sister’s warning haunted my thoughts—all this way for rotten, ugly teeth? When I opened the doors to the pub, where we arranged to meet, he saw me and smiled. Phew, he revealed typical American pearly white teeth. Later on he confessed that he’d been using whitening gels for years, and that he’d make sure to purchase them every time he  would visit America.

If you’ve enjoyed my writing and interpretation of ideas, then be sure to check out my books as well. I thank all of my subscribers for loyally reading my material, and giving me a greater sense of purpose.