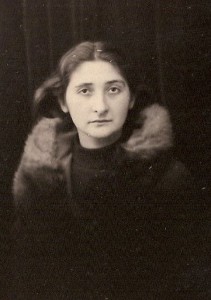 Gertrude in her 20s.

When my grandmother Gertrude wrote her poems she did not think that they were anything special. She casually shoved the poems in the drawer, beneath her favorite bookshelf, and forgot about them. She had no idea that years later I would read those poems, and possibly find a measure of comfort in her words. “The Photograph” was written after a photo shoot that was conducted by one of my cousins.  Apparently, granny did not like the results, nothing to do with the quality of the photos because Nicola’s work was remarkable—it was something else that bothered Gertrude. I don’t know whether to call it vanity or not, but it was obvious that she was unhappy with the way that she had aged. Gertrude had always told me that in her mind she had a totally different image of herself, that she had only seen herself as that nineteen-year-old that she used to be. With her eyes closed she never imagined one wrinkle, or an age spot; in her mind she still had raven black hair, smooth skin, and a long narrow frame. When she looked in the mirror she could no longer recognize herself. Nevertheless,  one day she rediscovered those photos, and had a complete change of heart.

Is that me? It cannot be

When I have only seen myself

As I was long ago

In the depths of dark I stand

Light focused where the need

With black design on white

In front of me the lens with her behind

She orders: Open your eyes wide

Look deep into the lens, what do you see?

An endless tunnel I am lost in space and time

And the core of my being is caught

In one single flash

In those few hours together

My granddaughter and I communed

To bring to light a truth

Which she learned but I had yet to find

Whilst the camera watched and waited

Yes, the image tells what is

Not that which is past

Now caught and fixed in time. 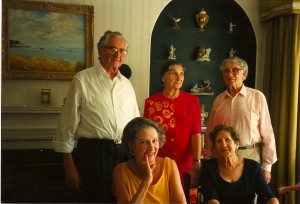 Gertrude (top center) together with her siblings at her 80th birthday party, London, England.

My novel East End Dreams describes Gertrude’s life in grater detail, beginning in the East End of London in 1910, and later on in South Africa. If interested in learning more about this book, please click on the following link:

4 Responses to The Photograph

Loved it.I will buy the book.

The poem is a srtong message to the young generation.

Hi, I found your page this morning (its 3:15am) and immediately loved it. GREAT WORK! I first read your story of lipsticks, bright red ect. Well I was reading it to my hubby & we both began to laugh and talk about the BRIGHT red lipstick my Ma are. Sadly I lost my mom 5 mths ago yesterday, well I loved the lipstick story I chose to read more and went to your most rescent post, I was surprised when I read about your grandma Gertrude. My ma’s middle name was Gertrude! Lol Grandma Gertrude’s poem was beautiful. Sorry for such a long note. 🙂

I am very sorry to hear of your loss; losing a parent, anyone close to you for that matter is something that I fear most. I too have lost family members in the past, Gertrude being one of them; she was in her mid-nineties and had lived a full life, but still I understand your grief. On a brighter note, I’m glad that I managed to make you laugh. I realize that people, women in particular, make a big deal out of their looks so if I am able to present them with unconventional information about the female body then perhaps they might learn to appreciate themselves, regardless. Whenever I explain my perspective on beauty and aging to other women, it evokes a smile; it’s a message that more women should be hearing rather than what’s out there at the moment, you know, that there is something wrong with showing signs of aging etc. I thank you for your lovely comment and with that in mind I better get cracking on my next article.