Let’s Put the Gay Back into Marriage! 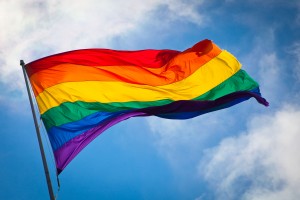 When I read about the successful passage of yet another ban on gay marriage, this time in North Carolina, I couldn’t help but feel that I’m actually living in such a primitive age. For all of our accomplishments, this entire gay rights issue reeks of archaic reasoning. The absurdity of it all—still having to discuss gay marriage in this day and age—leaves me scratching my head most times. I immediately think of my roots (although there are plenty of other examples to draw from unfortunately,) specifically of my Jewish relatives who lived in Poland under the oppressive grip of The Pale of Settlement rule, banning them from most aspects of society; limiting and restricting their work and dwellings. A popular slogan used to be: “Christians buy only from Christians.” But see, this was not always the case, and what this has to do with my rant this morning is that it’s the people who hold a limited and skewed vision of the world who are to blame for writing such a horrid version of history for certain groups of people. Forcing anyone to live in pain and suffering by not allowing them to live their lives to the fullest—because of what they deem is fair and equitable reasoning—is a travesty of justice. Jews for example, who lived in Poland in 1264, were granted a charter inviting them to live there by King Boleslav because he thought that Jews would be an asset to his country. The king believed that Jews were highly literate with a reputation of being excellent bankers, accountants, and administrators who knew how to keep the economy healthy. He believed that their contribution would benefit his country greatly. So the Jews entered what’s become known as the Golden Age in their history. Their new rights were granted by a specific charter: “We affirm that Jews are free to buy and sell all manner of things just as Christians, and if anyone hampers them, he shall pay a fine.” Unheard of at the time! My favorite though is the following: “We affirm that if any Jew cry out in the night as a result of violence done to him, and if his Christian neighbors fail to respond to his cries and so not bring necessary help, they shall be fined.”

My grandfather, Chemush, living under the Pale rules. They were the lucky ones because my great grandfather was allowed to continue work, but they had to move often because the rules permitting Jews to hold certain occupations and work in certain parts of the city would change often.

What progress. But as history has proven time and time again, the very places where Jews had thrived were the very places they suffered the most. In 1791 it all came to an end once the Jews were confined to the Czars of Russia under the Pale rules. And society took a few steps back, adopting once again their old intolerant, contemptuous way of thinking. The idea was that if Jews were kept separate from the rest of the population they would not infect anyone. My grandfather’s family, for example, took advantage of special dispensations given to Jews who wanted to live in the major imperial cities, but those were merely tenuous. His family moved frequently between Poland, Lithuania and the Ukraine in an attempt to avoid pogroms, find work, and enable my grandfather to gain a proper education. The problem was twofold really; it came down to a nationalistic and economic agenda. The Jews did not fit into the concept of the Russian Empire; they could not be included in this homogenous group of people based on same language, common religion, and the Slavic Mir. The second issue was that the majority of Jews lived in villages, fulfilling a vital role in village economy. They were rapidly becoming the majority of the middle class, so by limiting their areas of residence the Imperial authority was ensuring the growth of a non-Jewish middle class. Unless you are a strong believer and still endorse those types of racist decrees, and you feel the same Jewish threat looming over you today, then you understand how horribly wronged the Jews were for being treated in this manner.

Now use this example as a parallel for gay rights: just because gays do not share the same sexual preference, should they nevertheless be excluded from our society? When we read of the Jews’ history of persecution because of their cultural and religious differences, it’s easy to see how wronged they had been—that people should always have the right to practice the religion of their choice. It’s a battle that Jews had fought many times over the course of history, yet we’re still around despite the continued and reoccurring episodes of anti-Semitism around the world. Under the same token people should be able to choose the partner of their choice as well. When I think of the gay population in this country, I think of them as a group of persecuted individuals and I’m surprised that some lessons from history have not been learned— that intolerance is not a potent factor in changing people’s understanding of one another.

So why do people feel threatened by letting gay couples get married? If I were to adopt the same reasoning of Alexander the l for limiting the Jews’ rights because of their success, then am I to deduce that those who actively try to limit gay rights are afraid that gays will take over the whole marriage institution, and pollute it so to speak? Do they fear that everyone will end up in a gay marriage? Stupid, right? But this is exactly what I read from such rulings. Some say that it will confuse their children. Yes, I can see how difficult it would be to teach your children that everyone has the right to get married, and if your child is confused by it, then you can only blame yourself for planting this confusion in their mind. What’s really behind this sort of stern frame of mind? Why do they care, why is it their business in the first place? What makes me feel terribly disturbed is when the advocates for banning gay marriage say that it’s important to protect the sanctity of the marriage institution etc., the way that God intended it to be between man and woman. The hypocrisy of it all, when in truth most married couples aren’t living up to that promise either, including God-fearing couples for that matter. And how many people stray and cheat? Is it not a deviation of the sanctity of marriage when most marriages end up in divorce? Are they not lying to God the moment they decide to part, after all, the promise is to stay together “. . . till death do us part.” I don’t see anywhere that it says “till divorce do us part.” Remember that it was God-fearing people in our past who advocated all of those discriminatory laws, which I’m sure many God-fearing people today would say is not what God actually intended in the first place.

I’m not trying to turn this into a religious versus secular argument either. I don’t care what religion you are or what you believe or whether you believe in anything at all. In the same way that Jews’ rights flip-flopped between racist proclamations—limiting their freedoms at times—let these modern-day-rulings against gays flip-flop already so that another group of people will, finally, begin to enjoy the same rights.