An Obsession with White Vaginas 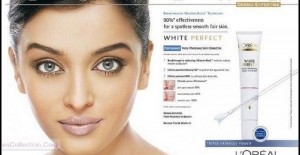 How many of us have seen a commercial on television for a skin lightening wash used to lighten the genitals? If you live in India then you would nod your head, and acknowledge this phenomenon. It’s no secret that in many different societies there are certain beauty ideals that would make westerners raise an eyebrow, and under the same token those societies that we deem as holding the strangest ideals and beauty regimens would feel the same about us. Not many societies promote the look of stick-thin women with artificial looking beauty or consider such a look remotely appealing. However, as much as we already know about different beauty ideals from around the world, even the Indians’ preference for lighter skin, I still managed to feel surprised by something that I had read in an article posted by the BBC News Magazine about Indian women and their concern for fair skinned vaginas.

So in India it seems that—the lighter the skin—the more beautiful the woman, and as a result of this centuries-old belief they have developed an impressively profitable skin-whitening industry. And you know what happens once these treatments are available—ads and commercials continuously promote their agenda for women who are ready and willing to believe that they are in fact less attractive but, alas, with fairness creams they can finally look attractive and beautiful. Not only have Indian women grown up with this notion that fair skin is better than dark skin, meaning the idea is home-grown, but when it has commercial backing then it must be true. It’s the same in this country with ads promoting Botox for women who show the slightest signs of aging; they feel unattractive and ugly, unless they can somehow remove those lines to look young and fresh, and thus appealing once again. 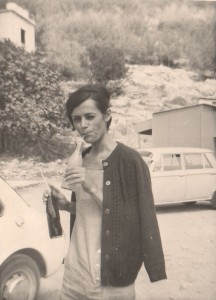 My “light-skinned,” Yemenite mother – caused a sensation when she was born!

A long time ago, I remember my Yemenite grandmother describing the birth of my mother, and how everyone in their neighborhood was taken aback by her beauty. It was back in the day, when a birth was a special event that garnered visits from neighbors, family and friends. Everyone had come to peek at the fair-skinned baby with bright red lips. In a predominantly Yemenite neighborhood in Rehovot, in the 1940s, my mother’s lighter skin was somewhat of a phenomenon—and apparently something worth mentioning so many years later.  This preference for lighter skin is not reserved for Indians alone, but it’s not a serious topic of conversation or a tradition that is inherent among Yemenites, as far as I know, certainly not in the same way that it has influenced Indians. I had never heard a preference for lighter skinned Yemenites as an ideal of beauty promoted within the community, although I can only speak for Jewish Yemenites and not Muslim Yemenites.

The woman in the commercial that I had mentioned at the beginning of this article felt the need to lighten her genitals when her husband supposedly rejected her, and once emerging from the shower, voila, pink rose petals appear on the screen and of course, the couple embrace lovingly. Oy. Ironically, in real life—nothing to do with the movies or models gracing the covers of magazines—I wonder how many men would actually turn a woman away because her vagina was not white enough. I also wonder how many men would ask their wife/partner to whiten their vagina. It’s a fact that there are many men who sit at the helm of the beauty industry, who are responsible for promoting crazy ideas of beauty, but then again I am sure that many of these beauty ideals are created by women alone. They convince themselves that this is what they have to look like in order to be deemed beautiful or attractive in society, without the influence of outside forces. Though, the fact that there are so many outside influences on the notion of beauty, makes it all the more difficult to ignore at times, and without realizing their influence on us, they managed to anchor these ideas in our head anyway.

Some of you may find this amusing, but in all honesty there are so many issues that stem from this idea such as the artificial creation of an elite class of women who are superior to their fellow darker-skinned sisters. It’s a complex they carry with them from a very young age all the way to adulthood. Recently, these commercials have been targeting men as well. These companies have also created specific products such as talcum and deodorant for fairer-skinned people. The BBC magazine quotes a few of these absurd and demeaning commercials: “Do you think twice before wearing certain clothes because they don’t seem to suit your body’s uneven skin tone?” Or how about: “Notice how the color of your hands is different to the color of your face.” Sadly, if you’re a darker-skinned actress you may find more roles and acceptance in Hollywood than you would in Bollywood.

But in India, advertisers have taken their agenda a step further, easily done when they had already been dealing with a society who has held the notion of “fairer is better” for centuries. With the help of modern technology they are now able to promote the treatments and profit from a non-problem really, if I’m allowed to observe as an outsider without offending anyone. This is the 21st century where so many archaic ideas and notions should have been dispelled long ago, but the fact that beauty can be packaged and sold to the public in an effort to meet certain ideals seems terribly obsolete and unnecessary. It’s also, without a doubt, a universal practice.