Aging Sucks! Or Does It? 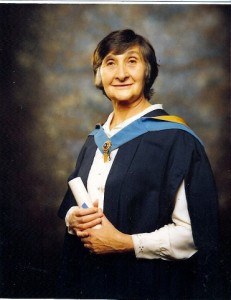 My granny Gertrude was not afraid of death, in fact, the more she learned about the sciences, the more at peace she became with her own eventual demise.

It’s true, especially if you go up the street to one of the supermarkets located near one of our senior retirement communities and you can’t help but notice the frowning, bitter looking elderly people who  seem to bark out orders at the sales associates or anyone else crossing their path. They have no qualms about ordering people around or making the most ridiculous demands as though their age, or time on earth, has earned them the right to forget about simple rules of conduct in society. Manners don’t apply to them anymore and becoming self-absorbed defines them completely. Sadly, negative behavior always seems to draw our attention, and it’s what we remember most times, but it would be a lie to say that we have not noticed the same segment of society, namely the elderly, who actually smile—too much. You know exactly who I’m talking about—people who always have a constant, warm smile spread across their wrinkly face. Their happiness is over the top, they’re intoxicated with life; so kind and patient, and they stare at your child as though plotting to kidnap them from you. You can’t help but wonder what’s their excuse for smiling so much? They’re old, wrinkled with dark age-spots dotted around their face and forearms; there’s the odd nanny-goat beard on some of the blue-haired ladies; they’re arthritis-ridden—you can’t help but notice those lumpy fingers grasping the shopping cart for support as they move at a snail’s pace across the supermarket aisles. Some of them suffering a mild form of dementia—they may drop dead at any minute—yet they smile at you as if life is absolutely wonderful.

The elderly people with a cheery disposition are the ones who fascinate me the most, because I can totally empathize with the frowning, ill-mannered ones. The question becomes what is the reason for a cheery or sad disposition—two extreme types of moods that have defined the elderly. Why are so many old people compassionate and nice or why are they moody and mean? I have no clue what they’re smiling about, and until recently I always attributed the bad mood with the fact that they were bitter about the fact that they have lived more years than they have years left to live. I figured that I would probably feel the same.

I don’t have many vivid memories of being a five or six year old, but among the few things that I can remember is realizing my own inevitable death, an idea that from that point on created much fear and worry. In my efforts to grapple with this problem, I remember gathering my neighborhood friends in order to tell them that I knew what happens when you die. I told them that death was just like dreaming—that when we die, we are in a constant dream-like state. I remember how we sat in a circle as I proclaimed my new found theory. I don’t recall anyone else saying anything to the contrary. However, I wasn’t entirely convinced with my theory, because I continued to ponder the issue well into my adulthood.  As an adult, I was surprised to learn how many people believed in life after death or in some form of reincarnation, and that people with faith found their belief system so comforting that death was nothing to worry about whatsoever. In my early 20s I was interviewed by a journalist, for something that completely escapes my memory, but what stuck to my mind was a portion of the interview when he found out that I believed that death was final. His entire demeanor changed; he told me that he pitied me, because I would live my life always wondering or rather terrorized by the whole idea of death. Well, he was right.

Going by my record thus far, I gather that my happy, positive disposition will one day turn into a frozen frown and I will become one of those older ladies who feels a sense of entitlement at the store. However, if I am to go with what I have recently learned from a number of articles dealing with this subject matter, then I am completely wrong. I will not become that bitter woman once I am older, even if I still hold the same thoughts about death.

According to a New York Times article by David Brooks, researchers who’ve assessed people’s well-being found that in our 20s we rate ourselves highly, we feel invincible—we are ready to conquer life. However, this becomes short-lived because once we age and reach our 50s there is a dramatic shift in attitude, people become sadder. People in those age groups are still dealing with stressful work situations and challenges; they’re worried about their retirement and whether they will have enough money to survive; sending their children off to college; paying off their mortgage bill and perhaps still trying to prove themselves. Once people have reached their golden years, all of those old challenges diminish. There are new challenges of course, but this is when things become interesting because older people are so much better at addressing those issues.

The same goes for our fear of death, we become better at handling the idea of death whether we are deeply religious or nonbelievers. Among many elderly who have been interviewed about the subject matter of death it seems that they’ve made peace with the idea, they will find out sooner or later so there is no reason to worry about it now. The only thing that worries them about death is getting their affairs settled so that their family members are left with a neat and orderly estate. Other than that, in their 80s people feel extremely happy! I did not take into consideration debilitating illness that keeps some people in bed and depressed for the majority of their golden years, but for the purpose of this article it wasn’t necessary to do so.

So in our 80s we finally learn to master the ability to see the same situation from a number of perspectives.  Life experience gives us the tools to navigate between perspectives. We become pros at bifocalism. With age comes enlightenment and you no longer treat life’s hurdles with the same sense of panic as when you  were younger—you learn that no matter what, in most instances, life goes on.

In our old age our brain starts deteriorating in many different ways, but the positive aspect of aging is the fact that we have a new found empathy and an ability to feel positive and happy. As for those elderly people who like to treat the rest of us like shit, they were probably just as moody and nasty when they were younger.

I digress here, but one characteristic of Woody Allen movies is the artful way in which his characters express their ideas of death. Of course I see this as an extension of Woody’s own fear of death and it’s something that has drawn me to his work; I feel a sense of relief that someone else knows exactly how I feel. But after learning all this new information about aging, I wonder whether in his 80s Woody’s characters will start expressing new ideas about death, or whether there will even be any mention of it? More interestingly, when I’m 80 and I watch an old Woody Allen film that discusses death, I wonder whether it will generate that same old feeling of awe that I’m not alone with my depressing thoughts, or will I just brush it off as a fragment of my old philosophies that have since become insignificant. In any case, I hope that I won’t be that arrogant, older woman who chooses to discuss the movie at the top of her lungs, regardless of the fact that there are other people around me. I hope that my hair is not purple or blue, and that my grandchildren pluck those unwanted hairs off my face and that I go to bed at night with nothing else but pleasant dreams.