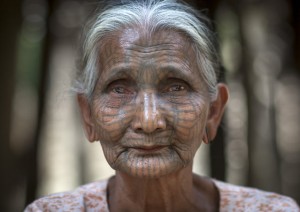 The only glimpse I’ve ever had of life in Myanmar (formerly Burma), has been through Anthony Bordain’s gastronomical adventures around the world, and the random National Geographic article about this country. But as an avid reader with a yen for learning as much as I can about different cultures and customs from around the world—specifically as they relate to women—of course I could not resist to learn more about the last tattooed women of Myanmar.

The tattooed women of the Chin, Rakhine and Arakan states of northeastern Myanmar—also known as the remote tribal Mindat area—have become the focus of photo journalists who are reveling in the opportunity to capture a dying tradition.

These women have only now emerged onto the scene, primarily because Myanmar has finally opened up its doors to the West, after decades of reclusion and the remote tribal area of Mindat had only unlocked its secrets a couple of years ago. From 1962-2011 the ruling military junta maintained absolute power and ignored international condemnation in the face of appalling human rights abuses, and isolating the people of Myanmar from the rest of the world. However, today there is a reasonably new limited civilian government, which has already brought in favorable reforms that will hopefully continue to usher in more positive change.

Getting to the tribes is an adventure in itself, involving day long boat rides and trekking in wild, densely-forested terrain in order to reach their villages nestled between inhospitable slopes. They had always lived in these remote destinations in order to protect themselves from their enemies. Traveling to Myanmar is like discovering a treasure chest at the bottom of the ocean, there is so much to see and explore when dealing with a country that has been isolated from the rest of the world for such a long time. With no commercialism, old traditions intact, authentic villages—which survive with no electricity or running water, as well as artistic wonders like beautiful Buddhist temples and thousands of religious Buddhist monuments built as far back as the 11th and 13th centuries, certainly, this is the place for anyone with an appetite for adventure. They have plenty of natural resources such as off-shore oil and gas deposits; as well as jade, pearls, rubies and sapphires but sadly, very little of this ever benefits the population.

The women of the Munn tribe from Myanmar, have been known to tattoo their entire face in a spider web-like design by using a dark blue ink that tends to look black at times. Women from the Chin tribe for instance have less prominent facial tattoos. Naturally, one would think that they tattoo themselves in order to look more attractive. Markings of this nature usually signify a local beauty tradition—but not in Myanmar—at least this wasn’t the genesis of this ancient, peculiar custom. 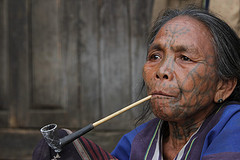 Apparently, their reasons for tattooing the face, stemmed from a long standing tradition of making their women look unattractive, even ugly, so that when they engaged in war there would be no incentive to steal their women and take them as slaves. After all, who wants to deal with an ugly woman?

However, centuries later their reasons for continuing this practice changed completely, and recognized as a sign of great beauty rather than ugliness. They made their ink by mixing cow bile, pig fat, plants and soot. Some of the women had opted to forego the web design and go for a totally dark blue/black mask instead.

The military junta had outlawed this ancient practice in 1963 and when younger women are caught with an inked face they are heavily fined. I have read that when you trek deep into the mountains of these remote regions, there are still younger women who practice this custom, but for the most part people are afraid of the fines, which include giving up half a cow, and others are embarrassed by it and prefer to join the world stage and adopt newer traditions. 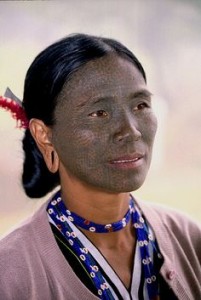 I think it’s always sad when a longstanding tradition comes to an end, especially when it’s one that has not hurt anyone. Though some would argue that tattooing their entire face beyond recognition could never be a good thing, and it’s a practice that has stemmed from century’s long brainwashing, which convinced these women that it’s actually a sign of beauty. All in an effort to appease the men’s desires. I have to agree with that argument as well. However, tattooing is an art form that has been practiced for centuries and by many, many different cultures to signify different aspects of their culture. In the past twenty years it has regained popularity in the West and become entrenched in popular culture, rather than a rite of passage practiced by soldiers or sailors while away from home. I wonder what these women would make of the type of tattoos that are prominent in this part of the world; whether they would see beauty or debasement of their old custom?

Regardless of where you stand with this argument, it’s hard to ignore the interesting images of these pipe-smoking, nose-flute-playing inked women.

This entry was posted in: Wrinkles
Tags: Burma, Myanmar, Tattoo.
Bookmark the permalink.

One Response to: Make My Wife Look Ugly!