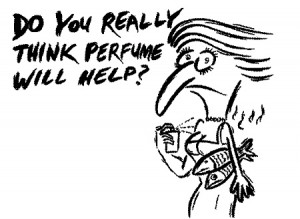 From my Insult Card collection

Before I get a load of criticism for my eye-catching title, allow me to explain. First of all, it’s not such an original title when the likes of Shakespeare had used a similar metaphor in “The Tempest”:

“What have we here? A man or a fish? Dead or alive? A fish: he smells like a fish; a very ancient and fish-like smell . . . a strange fish!”

Let’s be honest about this: everybody sweats and therefore unpleasant odors are a fact of life, and some of us smell more than others. I admit that smelly people have also been a good subject matter for my Insult Card line, but let’s keep our sense of humor in check here, and not become overly sensitive please. I don’t adhere to politically correct writing. 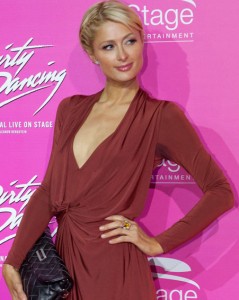 Even the rich and famous cannot escape those sweat marks.

Okay, not exactly news, but perhaps learning about how and why we sweat will allow us to be more understanding of the phenomenon. Also, in this post I will lightly touch upon a few aspects of smell in my effort to present an entertaining piece, but in future posts I will further develop some of those ideas, which I have merely mentioned in passing, such as discussing our sense of smell and its treatment through evolution as a social and cultural phenomenon, and old-fashioned ads that promote the use of deodorants as well as other beauty products. 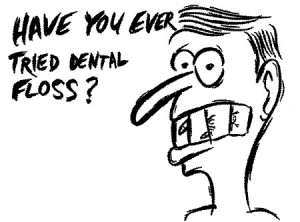 No need for words

In the extreme case of those who happen to smell like fish, or rotting eggs, or urine, this is actually a genetic disorder called trimethylaminuria. Mutations in the FMO3 gene cause trimethylaminuria, and people who smell like rotten fish cannot break down trimethylamine, which is usually broken down by bacteria, then oxidized in the liver and excreted from the body, but is odorless. One inherits this condition when both parents carry one copy of the mutated gene, although they may not suffer of this condition themselves. 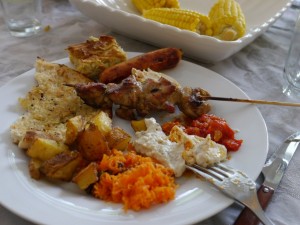 There was plenty of garlic, turmeric and cumin in this plate of food prepared by my friends Benny and Galit Zigdon. But so worth it!

Apart from this example of an extreme genetic condition, which makes one smell badly, the rest of us may stink from a number of different reasons. It’s easy to list the types of things that would make one smell, although there are a few that might catch you by surprise. The most common form of bad smell is a byproduct of spicy ingredients such as curry and garlic, to name a few; those ingredients will usually cause bad breath but also bad body odor. When these types of ingredients are digested they produce smelly gasses, which are then metabolized in the intestines and liver; however, some of these byproducts get absorbed in our bloodstream then released through our pores and lungs. When one exercises at the gym, in close proximity to you after ingesting these types of ingredients, their sweat will no doubt smell like yesterday’s recycled meal. 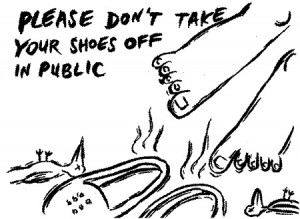 Who has not smelled stinky toes before?

While spicy food is a given, did you know that neglecting to properly towel dry after a shower will also make you stink? The bad smell comes about when moisture is trapped in the folds of your skin, between your toes; for women it could be under the folds of their breasts. You may think it’s nonsense, but bacteria can indeed multiply and once it’s mixed in with sweat, later on during the day, it will produce an unpleasant smell for sure. 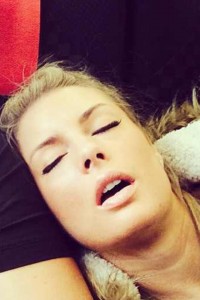 Similarly, if you are in the habit of sleeping with your mouth open, probably because you’re also a loud snorer, this dries out your mouth, which then triggers dead cells to accumulate all over your mouth—the reason for bad morning breath. If you follow a no-carb diet, you probably suffer from bad breath as well. When you do not consume enough foods that are your energy source, you burn your own fat stores for energy instead; this releases a substance into your bloodstream that gives you bad breath. You may look thinner and you may fit into your desirable jeans, but you’re far from perfect when your breath will keep everyone an arm’s reach away. 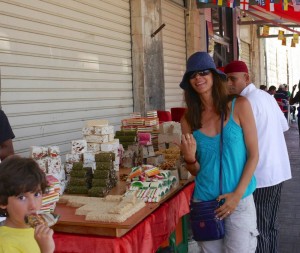 Did not always grow up in a sterile environment—here I am shopping for candy in Acre, Israel.

When I was a student at Manchester University, England, all those years ago, I’d try my best to stay in shape by visiting the university gym, at least a couple of times a week. However, neither the facilities, nor the good-looking, healthy dudes flexing their muscles bear any positive memory. Rather, the university gym has become entrenched in my mind as one of the smelliest experiences ever. I’m not exaggerating when I tell you that the smell was so offensive that sometimes I’d turn back and leave on the spot, because I found it hard to breathe in a room where it seemed that antiperspirants had been banned from use. And I felt this way even though I had not grown up in a sterile environment, I’d experienced the suburbs, but I had also grown up in the Middle East where a visit to the market place was an essential part of life over there. So a casual stroll through the narrow passageways of the Carmel Market (shuk) in Tel Aviv was like an awakening of all the senses. I was instantly bombarded by a multitude of scents—from the aroma of freshly baked breads and cakes, or ground coffee brewing, to the fragrance of spices, and the stink of fish or cheese, as well as a powerful whiff of garbage. Yet, none of this prepared me for the smell that awaited me at the gym in Manchester. 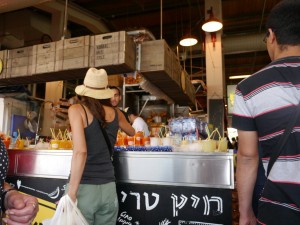 More shuk shopping at the Port of Tel-Aviv Market

Another memorable experience was a weekly seminar held in my professor’s office—only four of us at a time would attend and sit around the professor’s desk, and if only the desk could have acted as some sort of barrier for the smell, but unfortunately this was not the case. The room smelled like rotten garlic, it was awful. I remember my eyes fixated on the large sliding window behind the professor, I wished that I had the courage to get up and slide the window open. I mean, there I was—a young law student—hopefully learning how to stand up for my future client’s rights, yet I had failed miserably when it came to fighting for my rights as a student to breathe fresh air while attending one of my seminars.

And the English underground in the heat of summer, again, one of those unforgettable experiences, especially during rush hour when you find a smelly stranger’s arm stretched right in front of your face, but you have absolutely no room to budge, not an inch, not a centimeter. So you remain standing there for the duration of the ride with your mouth shut tight, because for some reason you feel it’s better to just breathe through your nose. Absolutely revolting. 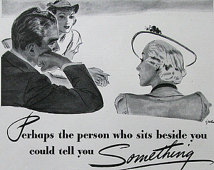 A vintage American ad for deodorant

However, being smelly is not reserved for the English alone; I’ve had plenty of other experiences in other countries as well. Also, I’ve touched upon some aspects of this topic in another post titled “Stinky Pits,” and if you are not familiar with it, I suggest that you check it out.

In evolutionary terms, our body odor has not always been viewed as something offensive, only during the 20th century had society revolutionized the idea of odor and smell emitted by our body as something undesirable. Out of all of our senses, by the way, our sense of smell had been relegated to our most primitive sense. For this reason we actually know a lot less about our sense of smell than we know about sight and hearing. However, before the change of ideas took place, it was a common practice for a young English man at a dance to absorb his sweat with a clean handkerchief, and once the dance was over he would use it to fan his partner. All this was part of an act in seduction to spread his scent and bewitch his love interest. Since the odor that we emit is significantly different in both men and women, it is specifically directed toward the opposite sex. Whether men and women are aware of what’s happening to them or not, they are automatically attracted to the other sex by picking up their specific scent.

I’m not going to bore you with too many medical terms, just a few basics so that you are better able to understand your body. We have two types of sweat glands, which produce two different types of sweat that is actually odorless. However, the sweat that is produced in the armpit and groin tends to smell bad once it’s combined with bacteria, which brake down the sweat molecules into compounds with a more offensive odor.

The good news is that recently the smell-making bacteria have been identified by scientists; it means that antiperspirants can be specifically tailored to deal with the problem. While a token few people still prefer the “real smell” of a man or woman, you’ll find that the majority is obsessed with smelling good. The cosmetics industry has done tremendously well teaching us how to smell differently, certainly with no resemblance to fish, rotting eggs or garlic etc. And those who walk among us with that fishy or other unpleasant smell, are often a persona non grata, a social pariah etc. I say this with a smirk on my face, because all you have to do, as I’ve mentioned before, is visit the London underground in the middle of summer in order to discover that smelly people are not so much an anomaly.

With all of our efforts to rid ourselves of what is natural and has been part of our evolution, I wonder whether we will somehow erase an important component in our chemical signaling—especially now that the deodorant department at the pharmacy will provide us with safer guarantees for unwanted odors. How will this affect us in the long run?

Anyone interested in purchasing one of my Insult Cards may do so at: My Atypical Store