Botox And The Chef

Earlier this summer an Australian television reporter caught Chef Gordon Ramsey by complete surprise when she asked whether his “refreshed looks” had anything to do with Botox treatment in America, and whether America did this to him. I could detect a little sarcasm in her voice when she asked the latter part of her question, and it was this particular part that caught my attention more than anything else.

We all know that botox injections have a wide use all over the world, Americans are not the only ones who have an interminable need to look young and chase after their youthful appearance. However, why is Botox still heavily identified only with America? Truthfully, most people don’t even use it ( probably because they can’t afford it), and there is also a minority who choose not to use it. Sometimes people from abroad tend to be quite judgmental when it comes to America: “Oh those crazy Americans”–type of conjecture. It seems that a good portion of their ideas about Americans come from nothing else but television stereotypes. And so this particular journalist made it seem as though the use of Botox, as well as other youth-enhancing procedures, has become a sort of rite of passage for any actor who wants to remain in the American entertainment business. While in England, for instance, it’s almost a source of pride to remain with crooked, yellowish teeth, and any attempt to whiten or brighten automatically alludes to that American superficiality. I fear that by using that very example, I may have stereotyped English people, but you know what I mean. I don’t know much about Australian society, but taking into account the Journalist’s question, I gather that Botox is still something of an enigma in that part of the world.

Regardless, I have read about plenty of actors who have vowed to stay away from that little needle, because they staunchly believe that without the proper facial expressions, one cannot possibly act with conviction. I have also noticed plenty of actors who appeared totally natural in recent films that I’ve watched, and it’s always a refreshing experience. The plastic look is so prevalent in some South American countries that it’s ridiculous to associate it with North America alone. I don’t know, perhaps it has to do with the fact that American television and film stars are recognized all over the world and so Botox etc., is automatically associated with American actors rather than Venezuelan movie stars for instance.

Gordon Ramsey answered in the negative, but in other interviews this summer he came clean and fully admitted to have developed a complex about his wrinkles. Hmm, I wonder how that could’ve possibly happened? In another interview he said that there have been many unpleasant remarks over the years. There was the time when a makeup artist asked him whether he suffered an accident when he was younger;  I wonder how old this makeup artist was, and whether he/she had ever seen a real wrinkle before their interaction with Ramsey. I’m being purposefully bellicose, just for entertainment purposes, but I can imagine how the new breed of makeup artists these days have probably become very well acquainted with the art of  creating wrinkles in the event that an actor needs a line or two added to their face when they’re required to accurately portray either a 40, 50 or 60-year-old. 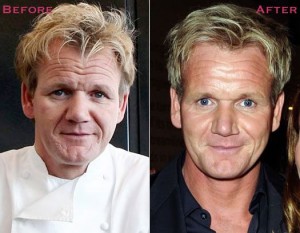 Gordon Ramsay before and after Botox. (Getty images.)