Certain things always catch my attention and such was the case with an article about Amanda Redman, published in the Mail Online. The caption read, “Amanda Redman says that she is dreading turning 50. Well, it’s a bit too late for that—as her 1957 birth certificate proves.” I never really heard of this woman before, but still, I wanted to know why she dreaded her 50s. I took a quick glance at her photos and she looked absolutely stunning, and in the event that she’s healthy etc., what was the root of her problem, I wondered? “I do not want to turn 50, it’s horrible! I don’t want to be thought of as past it . . . !” She continued her rant by saying that she’s worried that no more roles would ever come her way. Okay, so now it made perfectly good sense to me—she’s an actress and as such the aging standards differ. In movie lingo, I’m assuming that 50 means one foot in the grave, and less desirable roles to choose from, which is not the case for men by the way. These double standards in the workforce extent to unequal pay, even in Hollywood and inequality in terms of how men and women are perceived at a certain age; a man in his 50s, with graying hair and crows-feet around his eyes, is usually full of  character, sexy and charming—a woman on the other hand, well you know already—I’m not teaching you anything new.

If Amanda meant to say that roles for women of a certain age are scarce, then I understand her frustration, but there is so much more that does not make any sense to me. Does this mean that all we want to watch on television revolves around the life of babies, teens and twenty-somethings? That interesting female roles only exist for women below 50? This is hard to believe. Additionally, it’s hard to believe that the public, as a paying audience, would put up with such nonsense. The viewing public is made up of people of all ages with a variety of interests;  for one am always attracted to interesting characters—age has nothing to do with it. Do people in the entertainment industry assume that we, the audience, would only be interested in watching movies that have to do with 20-year-olds? And that anyone beyond that age range would have absolutely nothing to offer us? Or when an interesting story involves a middle-aged woman, should we be convinced or inspired by the character if she is actually a 20 or 30-year-old made to look older, rather than casting a woman of that exact desired age?

When I watch TV, and the actor in the leading role is someone whose face has been distorted by plastic surgery, I’m immediately distracted. I become too concerned with their looks instead of becoming immersed in the actual story. At the end of the day, all I care about is whether the character is believable or not. I don’t care who’s in a lead role, but rather if they are believable and good at portraying the character that I’m watching, and artificial altering of looks sometimes does the opposite of what’s intended. I can tell you for a fact that if television only offered shows that revolved around the young, I would be bored to death. I have not done a comprehensive study of British television, so I really don’t know what’s currently playing; however, I doubt that it only involves leading roles for the young since Europeans don’t share Hollywood’s views on aging. Nevertheless, I do understand that if there are less roles for the aging woman then it’s a frustrating field of work all the same.

My hope is that Ms. Redman’s agent will continue to pursue roles for his client that are age appropriate, and that the industry will begin to offer the “older woman” a lot more leading roles. Ms. Redman can rest assured that she is beautiful, and perhaps start relying more on her ability to act, rather than dazzle with her looks—maybe that too will help her land a lot more roles in the future, at least the type of roles that an intelligent audience would prefer. We too are responsible for ticket sales at the movies, and for contributing to the television network’s wealth. 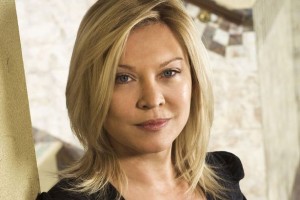 The beautiful and ageless Amanda Redman