Computer games have been an ongoing source of entertainment for years so it’s no surprise to learn that the very keen, computer crazed individuals, have somehow caught up with the rest of us, and they too have aged. The pending question though is how well have they aged, knowing that they have spent a decade or more sitting for a myriad of hours per day, every day, in front of the screen while their brains have been lured into their virtual playground.  In a recent article from Haaretz newspaper, it said that studies conducted by the American Center For Disease Control, have proven that those who begin their computer- game-addiction at a young age, and continue doing so for decades after, will not age very well. They have been known to turn into very depressed and overweight adults with a tendency to develop many other health related complications.  In America alone, 65% of households own computer games, and 25% of those involved in playing them are 50 years and older. Jim McGregor, an analyst working for In-Stat was quoted as saying that: “The studies which have been conducted also reflect the social networking phenomenon. While all those social networks have been very advantageous, they have also contributed to a fatter, lazier, and less intelligent society.”

Promise me that after reading my blog, on a daily basis no less, you will: jog around your neighborhood at least once, followed by twenty push-ups, fifty sit ups, fifteen squats and a good stretch.  Seriously though, I too spend a lot of time in front of my computer and whether it’s a computer or anything else that keeps you stagnant for hours, it does take a little bit of cheer-leading to get up and exercise. Recently, I’ve discovered yoga. Something that I had resisted for years—something about the mattresses everyone carries around, rolled up and tucked neatly under their armpit, the clothing, the perpetual peaceful radiance—I likened them to a cult. However, when looking for a new type of exercise regimen, after growing sick and tired of jogging and my infrequent visits to the gym, I did what I do best and logged onto YouTube and typed in “yoga.”

Instantly,  I was transported into a world that was completely foreign to me. I was used to a completely different rhythm of exercise, one that  involved great straining and sweating. I have since learned that even though it is not apparent from first glance, that you do sweat with yoga practice, and it is more challenging than anything else that I have ever done before, but there is so much pleasure derived from the practice, and instant gratification.  I was pleasantly surprised to see how fit and beautiful those instructors were. After following a few routines, I happened to come across one instructor in particular that really delighted me, her name is Sadie Nardini. I began to watch and follow the different routines that she offers and after five months of picking and choosing her clips on YouTube, I feel fantastic. I feel much fitter than before, without having to pry myself away from my beloved computer. Sure, I’m still a nature lover and I will never miss the opportunity to go hiking when the temperatures drop, but as a fact, I am here to say that it is indeed possible to exercise in your home, in front of your computer, and yet to maintain a healthy, fit body. 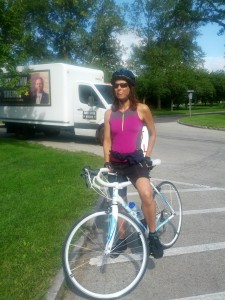 I know, if it’s not one eye shut then the tongue has to be in mid-something or other. Still, biking has also been a new favorite of mine! I like to do an even blend of activities in order to stay fit.

One Response to: Computer Yoga

Ha, I am certainly one of those guys who sits in front of the computer for 8 hours plus each day and I read with interest that the average computer gamer is 35, male, fat and depressed. I can’t say that I am interested in yoga, but I will take your advice and eat less donuts and chips while I work and perhaps do some sit-ups and push-ups.

Who knows, perhaps it will make me a better gamer. Now all I have to do is persuade my room mate that I am not mad as well as depressed and overweight, when she sees me doing push-ups in front of my pc.