Pity or Piety Among the ultra-Orthodox in Israel 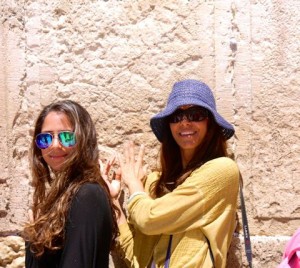 Maya and Ilana at the Western Wall, Israel.

What does a blog about wrinkles have to do with the ultra-Orthodox in Israel? Well, it’s about women’s civil rights for a start, in a modern, democratic country. Also, it’s the type of subject matter that would make you cringe and wrinkle in an instant. I am also aware that writing about this will inevitably create some sort of controversy among those who disagree with my observations. However, I could not help but feel disappointment with the Israeli justice system when I read the news last week about a group of 10 women who were detained by Israeli police after praying at the Western Wall while wearing a prayer shawl across their shoulders. I’m not an expert in all matters religious, but I am somewhat knowledgeable in the field and anyone secular living in Israel is aware of ultra-Orthodox piety taking over mainstream Israeli life. Extremism, no matter what the belief or practice may be, is never a good thing, but as long as nobody infringes on my freedom to choose to live the way I want, I don’t care whether they believe in dog, cow, or choose to feed on a grass and mud diet. My specific rant obviously has to do with some of the ultra-Orthodox Jewish denominations known as Haredim. I’m certain that there are plenty of Haredim who are disgusted by the intolerant behavior practiced by some people in their community. In my family alone, I grew up surrounded by many religious people and I respect each and every one of them, almost. I say almost because I do have an aunt who suffers from that common practice of other pious individuals who disrespect anyone who does not adhere to their belief system. She once called me a whore for wearing a tank-top when visiting my grandmother. I have plenty of religious relatives who have never said a bad word or tried to intervene in my lifestyle. Even my religious grandparents accepted me just the way I am with never, once, imposing their beliefs on me. But my aunt’s behavior pales in comparison to the wrath that I’ve experienced from some Haredim. 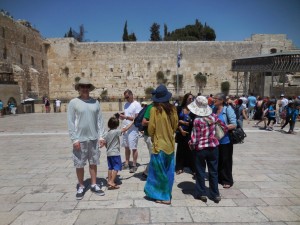 Strategizing where to meet after separating at the wall.

In Israel the law recognizes the Chief Rabbinate as the supreme halachic and spiritual authority on the people of Israel with all matters that concern religion. In this day and age, still, women are barred from conducting prayer while wearing a prayer shawl, traditionally used by men only. Outside of Israel it’s a common practice among reform Jews to use a prayer shawl during service. The first thought that comes to mind is how can the Israeli justice system uphold this edict imposed on them by the ultra-Orthodox—after all, Israel is a democratic country—we are not living in the Dark Ages or in biblical times when women’s roles were defined by the dominating male mind-frame of the times. To be fair to the Orthodox belief system, the prevailing custom is that women in fact do not wear a tallit, because men as well as women, are forbidden according to the Bible from wearing clothing that is normally associated with the other gender. Also, when a woman chooses to wear the prayer shawl she ends up drawing undue attention to her excessive piety in an inappropriately ostentatious manner. 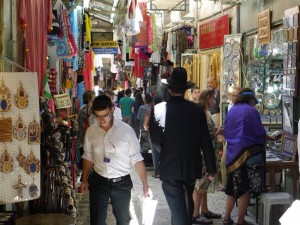 I try to go out of my way to understand other people’s customs and what lies behind certain behavior, but I have to say that even after reading the halachic reasoning, I still come up with an archaic rule that’s not favorable to women at all. Our troubles today can be directly related to the way in which Ben Gurion, our first prime minister, dealt with the ultra-Ortodox. He did a lot of wonderful things for us as a nation, but if he would have looked into the future he might have done things a little differently on the religious front. Ben Gurion made many concessions to rabbis in exchange for their political support, and this is why, for instance, ultra-Orthodox men were exempt from mandatory military service at 18, because of their continuous religious education. This is how the nightmare began and for anyone projecting the future, it doesn’t look very good for secular Israel when there is an exceptionally large birthrate among the ultra-Orthodox. 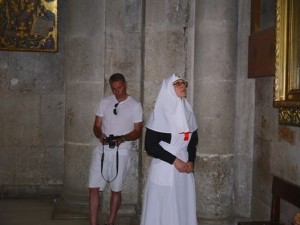 Different religions all across the city.

It means that my beloved Israel, a country that was founded as a secular, modern state; with modern laws, western clothing, universities, equal rights for men and women in the workforce and the political arena—is destined to change. All of that progress and enlightenment will be a thing of the past, because under ultra-Orthodox practice, there is a strict shunning of any modern views, they are prohibited from reading secular literature of all kind, they do not further their general education. The majority of them only have a primary school education, so the sciences and math are set aside for religious education instead. They are strongly averse to change, still opting to dress in the same 19th century outfits of black frock coats and tall wide-brimmed hats. Anyone who adheres to practices from thousands of years ago scares me, regardless of whether they are doing so because they think they are following Gods laws, regardless of whether they are just plain oblivious to how their behavior affects others. So many times I’ve experienced belligerent, aggressive and rude behavior on their part. Some of the ultra-Orthodox oppose secular Zionism because they see it as a threat to their belief system, but let me emphasize that within these religious groups, there are some who support the Zionist movement. Also, many of our soldiers and commanders have belonged to Orthodox sects. 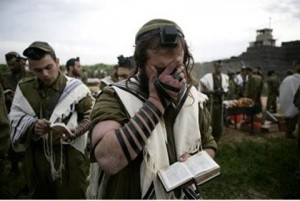 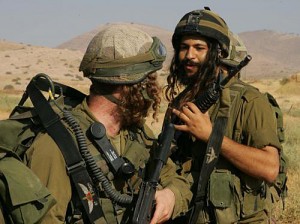 But the ones who go out of their way to isolate themselves from the rest of us, leave a loud and clear message, that there’s no such thing as “live and let live,” or the respect of any other denomination or religion for that matter. I remember desecrated bus stops that featured a bikini-clad model; there have been plenty of incidents in Israel of secular women being forced to the back of the bus to avoid mixing with ultra-Orthodox male passengers. We’ve all heard about the incidents of ultra-Orthodox men cursing and spitting on secular women and girls who pass them by on the street. And then there is my experience as an EL-AL flight attendant having to work in a section of the airplane populated by ultra-Orthodox men. I remember leaving those flights feeling infuriated as well as embarrassed. Many of them would treat the female flight attendants with such contempt, never looking at us or heeding to our instructions. Sometimes the flight would be delayed because they’d refuse to sit down next to a woman, and if the female passenger refused to move, well, what a mess. I realize that this particular behavior is unintentionally rude, because they believe that they are sinning if otherwise engaging in any sort of contact with the other sex; however, in a mixed society, in these modern times their behavior should become somewhat modified. They were loud, obnoxious, and behaved in utter disrespect toward us and the rest of the passengers. If the occasional male tourist happened to sit next to one of them, they looked so hapless and scared and I would find myself having to do a little bit of damage control. Later on I did my own little research and found that some of their religious leaders say that the refusal to sit next to a female passenger on a plane is utter rubbish and taking things way out of proportion. Supposedly, if the man has no intention on having a sexual relationship with the stranger, then there is no reason to avoid sitting next to her either. Now forget about the cumbersome clothing, the unruly beards, but how on earth could they imagine that they could possibly have sex with the woman sitting next to them, when one has to be extremely talented to perform a sexual act in those inhospitable, tiny bathrooms? 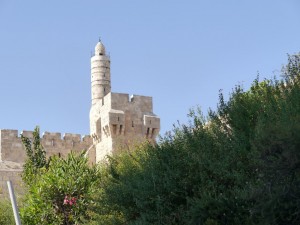 Beautiful Jerusalem, like no other city in the world.

My favorite story is when I visited the Western Wall with my daughter a few years ago. As a woman who abides by the law, and adheres to other people’s customs, I knew better than to arrive at the Wall with bare shoulders, so I made sure that on that particularly hot and humid day, I brought a long-sleeved shirt to cover myself up completely. This I did not consider too extreme, after all, men have to do the same, dress appropriately in the vicinity of this holiest of places. This too is an example of how the secular have no problem respecting another’s beliefs, even though it means going out of our way to accommodate other people. However, it appeared that my humble attire did not appease the brigade of religious women who police the area for inappropriate dress. When a religious woman tapped me on the shoulder and forbade my daughter and I from gaining access to the Wall, I fumed with rage. I could not believe her audacity to criticize the way I dressed. In my opinion she was dressed terribly, with an oversized, stained jeans-skirt and a shapeless stripped shirt and hat covering every inch of her scalp, with every bit of hair tucked away. She told me that I could not approach the Wall until I buttoned up my shirt, when for all intense and purposes I was already wearing a shirt underneath my oversized shirt, and none of my skin was showing. Wasn’t that the purpose of the dress code? Things only escalated when a fleet of dress-patrol women approached me—surrounding my daughter and I completely—with no avenue of escape. A huge argument ensued between us and as it reached its climatic peak, they threatened to call the police because of my inappropriate clothing. I laughed, but they told me that I was breaking the law. I told them to go ahead and call the police because, as far as I was concerned, I thought that it was against the law to be as ugly as they were, inside out. With that said, I waved them off and plowed my way to the Wall where I stood for a few minutes, hoping that the police would not arrive, but trying to compose myself and trying, oh so hard, to enjoy my moment at this archaeological wonder. 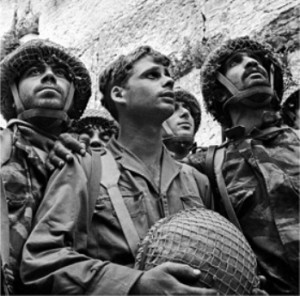 Israeli paratroopers, finally, get to see the Western Wall after the liberation of Jerusalem in 1967.

For me it was not a religious experience, but rather one that involved my deep respect and enjoyment of my Jewish culture and history. I thought about the Israeli soldiers who had died during the Six-Day War in 1967 while liberating this part of Jerusalem from the Jordanians, and what it must have meant for them to be reunited with a pivotal piece of Jewish history. How religious and non-religious soldiers alike broke down in tears as they approached the Wall for the first time. So at that moment I decided to ignore those ugly women and their ugly behavior, and think of all the good and positive that defines Judaism. Also hoping that with enough like-minded people, tolerance will prevail and all the rest will have no choice but to learn to accept us and respect us in the same way that we’ve chosen to respect every other human being, no matter who they are or what they believe in. The leaders and rabbis of these particular communities have their work cut out for them, but without their intervention, nothing will change.